The Kent State University Board of Trustees voted Wednesday to approve a merger that hands over operations of its public radio station, WKSU, to Cleveland-based Ideastream Public Media.

Under the agreement, Ideastream will take over the management of WKSU starting on Oct. 1, although on-air programming will not change just yet. WKSU employees are being offered jobs at Ideastream Public Media, and some of those jobs will be moved to Ideastream’s downtown Cleveland headquarters. Kent State will retain WKSU’s FCC license, which means that although the newsrooms are merging, the university will still be responsible for compliance with FCC rules and regulations.

“Currently both Ideastream Public Media and WKSU allocate significant resources to deliver the same nationally syndicated programs to the same population often at the exact same time,” WKSU Executive Director and General Manager Wendy Turner told the board. “Nearly 90 percent of our news and information programming is duplicative, [and] our broadcast transmission is overlapping 96 percent of our geography.”

The agreement will also bring some changes to Ideastream’s existing stations. Under the plan, by April 1, 2022, WKSU will become the region’s main NPR affiliated news and information station, and the two Ideastream stations will in essence trade places on the dial - and switch call letters. The current classical music station, 104.9, will take over the WCPN call letters and become a repeater station for news coverage. Meanwhile, WCLV and its classical music programming will reside instead on 90.3.

There are also plans to work with Kent State University’s journalism program, providing students with opportunities to develop their skills at the public radio stations.

Although rumors of a possible merger have been floated for years, the two stations announced last summer that they had been awarded a $100,000 grant by the Corporation for Public Broadcasting to explore working together. According to an Ideastream press release Wednesday, that study concluded that both stations and their audiences would benefit from a partnership. 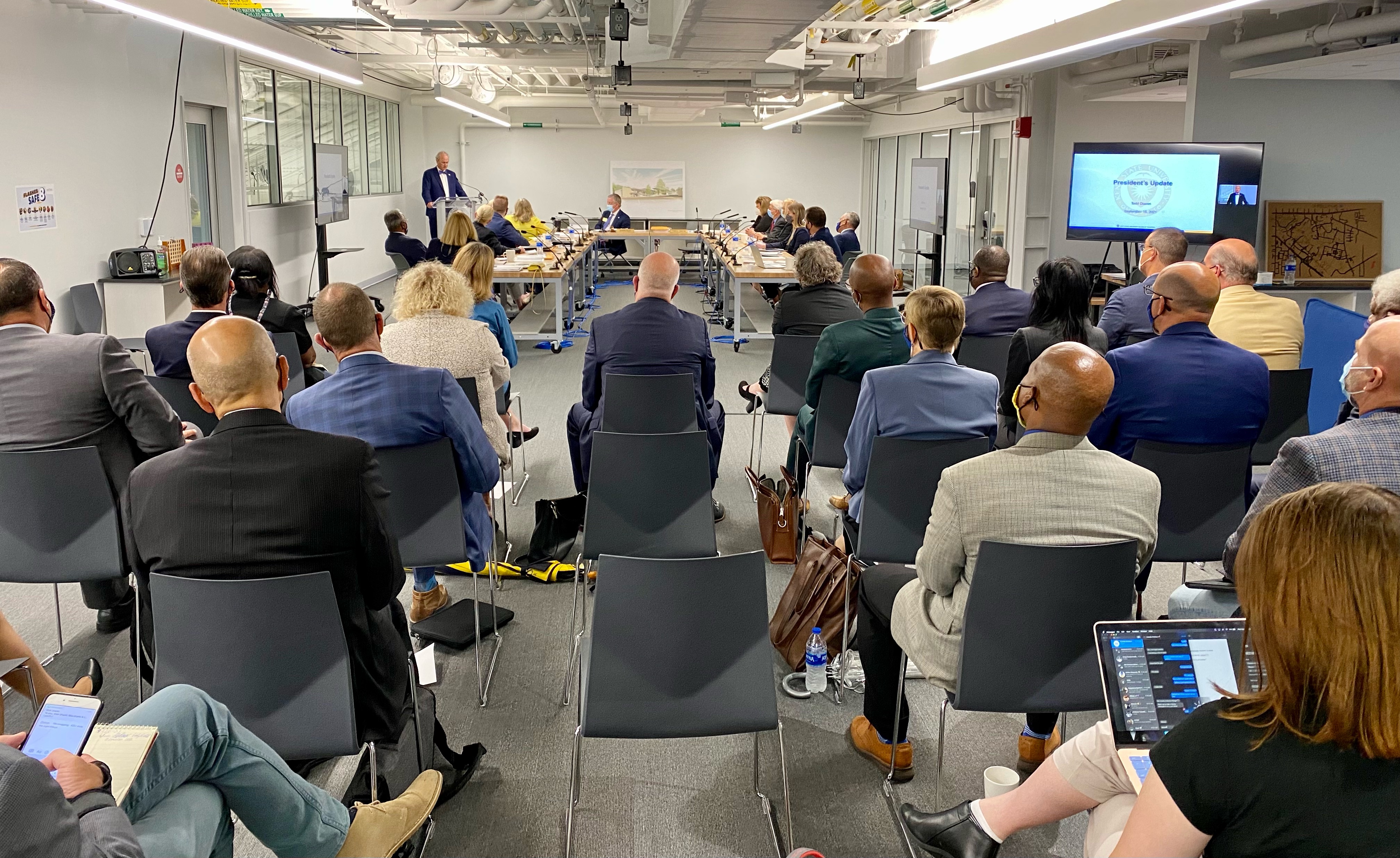 Kent State University President Todd Diacon addresses the Board of Trustees at the Sept. 15, 2021, board meeting. [Ida Lieszkovszky]

“We are excited to be bringing together a group of talented, experienced professionals whose mission every day is to provide accurate, creative and localized reporting to the communities in which they live and serve,” said Kevin Martin, Ideastream Public Media President and CEO, in Wednesday’s press release. “Simply put, our goal is to provide more programming, expand journalism for the entire region, and build on our established business models to become even more sustainable.”

WKSU listeners have expressed concerns on social media and in local publications, including The Akron Beacon Journal and The Portager, about what the merger would mean for WKSU, its unique sound, and its local news coverage.

George Green of Akron describes himself as a “medium to occasional” listener of WKSU, tuning in to catch up on the news or to hear Ohio Governor Mike DeWine’s regular COVID-19 updates. He said he is concerned this merger will mean fewer Akron area stories will be covered.

“There’s only so much air time in the local segment and it will be further split among the local areas like Cleveland, Akron, Canton,” he said. “I’m hopeful that it won’t be but I’m a little concerned that it might be.”

But Ideastream President and CEO Kevin Martin said he wants WKSU listeners to know that “the programming and coverage you enjoy and support will not be going away, instead the partnership is designed to promote growth and expansion.”

Station leaders said part of the implementation plans over the next year include gathering input from community members and longtime listeners.

Kent State University President Todd Diacon told the board that while “change can be difficult,” this is the right step for both public radio stations and the university.

“Public radio listeners are a passionate bunch, they are a discerning public, and they are a loyal body. We love and we embrace them all for those qualities,” he said. “We know that joining together with Ideastream (and) Kevin’s great leadership means that we’ll be bigger, means that we’ll be stronger and most importantly ever more committed to the expansion of journalistic excellence in Northeast Ohio.”

WKSU News Director Andrew Meyer said after the vote that the merger will mean “a significant increase in the manpower and resources that we’re able to devote to journalism in Northeast Ohio.”

He said this will allow the newsroom to expand both the breadth and depth of its coverage.

Kent State had previously allocated $455,000 annually to support WKSU’s operations, but will no longer contribute those funds under this agreement. No money will change hands as part of the merger.

The agreement will expand Ideastream’s reach from 2.4 million to 3.6 million people, reaching 22 Northeast Ohio counties. Ideastream will now employ roughly 150 people, including more than 40 people in its joint newsroom.

Neither Ideastream Public Media or WKSU management were involved in the reporting or editing of this story, nor did they review it before publication. Ida Lieszkovszky is a freelance reporter working in Northeast Ohio. This story was reviewed by an editor outside both organizations.