There are food deserts all over Cleveland; Here's what other communities have done to fix them David Sims, 58, of Maple Heights, said he shops at Farmer Jones Indoor Market in Maple Heights, Ohio because the location is convenient, the prices are nice and the staff is friendly. "And I try to support our business in the neighborhood," he said. [Stephanie Czekalinski / Ideastream Public Media]
Featured Audio
News
Lisa Ryan
May 23, 2022
Health & Science
News
Lisa Ryan
May 23, 2022
Health & Science

The closure of the Dave's Market in Cleveland’s North Collinwood neighborhood created another food desert in the city.

While it's not clear what will come next at the site of the now-shuttered store, there are communities across Ohio that are home to nonprofit grocery stores or co-ops that provide access to healthy food in neighborhoods where traditional grocers have failed or do not operate.

Co-ops make up only a small share of the U.S. grocery ecosystem, accounting for a reported $2.3 billion in revenues. By comparison, Kroger generated $132.5 billion in sales in 2020.

Despite their smaller footprints, many of these alternative stores are providing fresh produce and healthy food in neighborhoods that were previously food deserts. Leadership said that while profit is important, providing healthy food and jobs for the communities they serve is a central mission.

In May of 2020, Farmer Jones Indoor Market in Maple Heights closed due to the economic stressors of the pandemic. The grocery store had provided fresh produce from its location on Broadway Avenue for 60 years.

The closure meant that fresh produce was harder to get in the neighborhood, but Farmer Jones wasn’t closed for long. A nonprofit, Rid-All Green Partnership, took over its operations later that year. 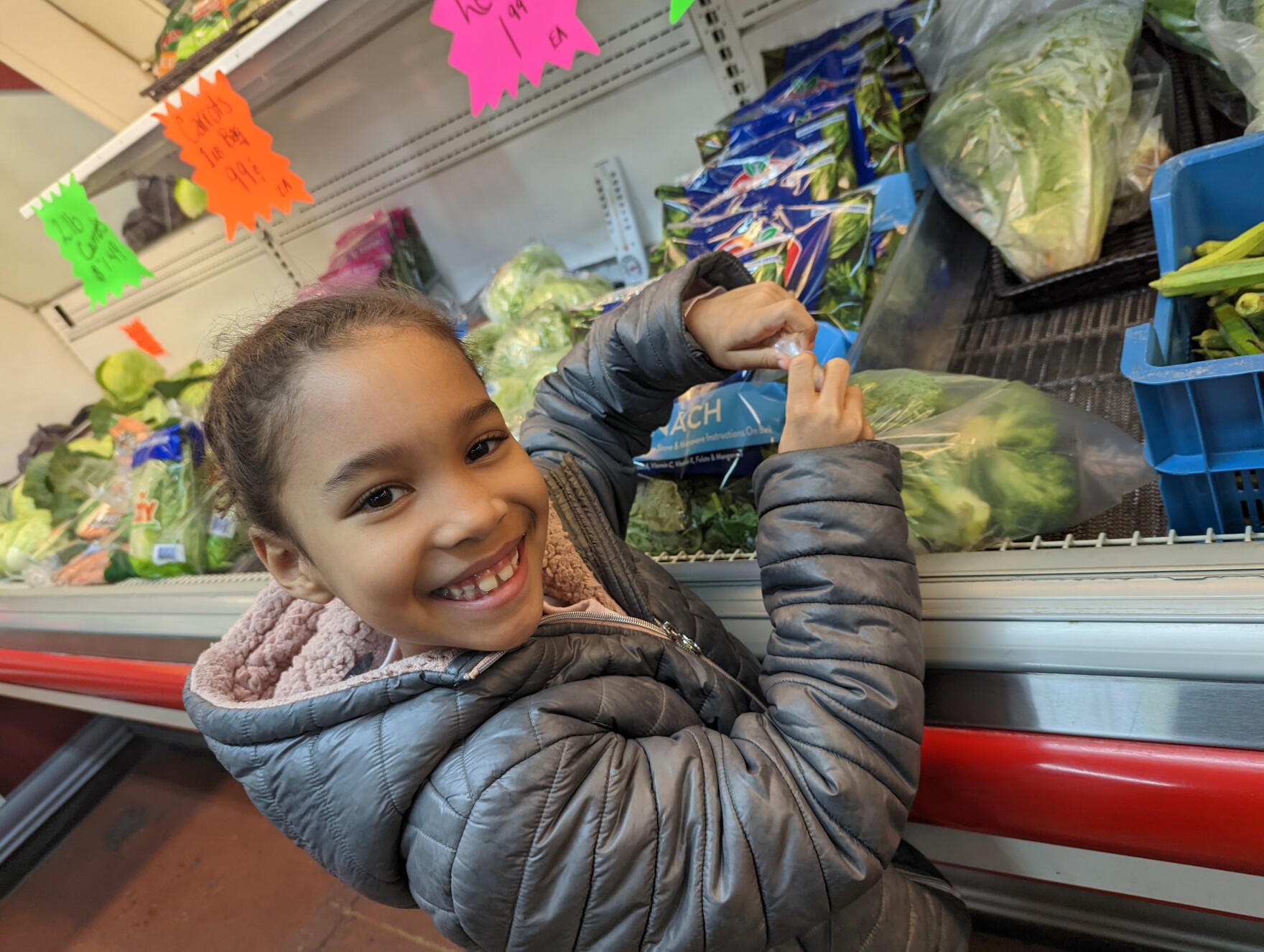 Nonprofit stores are one way a grocery store can be successful in a food desert. For Rid-All’s executive director Keymah Durden, the point isn’t to make money. It’s to make fresh, healthy food accessible.

“It’s a quality of life issue. We know that diet is a key driver of the top four or five health-related diseases, everything from heart attacks, diabetes, high blood pressure," Durden said. "Those things particularly affect low-income and minority communities worse than more affluent, suburban communities."

Many parts of Maple Heights are still considered a food desert, just like the area around the now-closed Dave’s Market in North Collinwood. Maple Heights, like North Collinwood, has a higher-than-average percentage of people living below the poverty line, according to figures from the Center for Community Solutions. 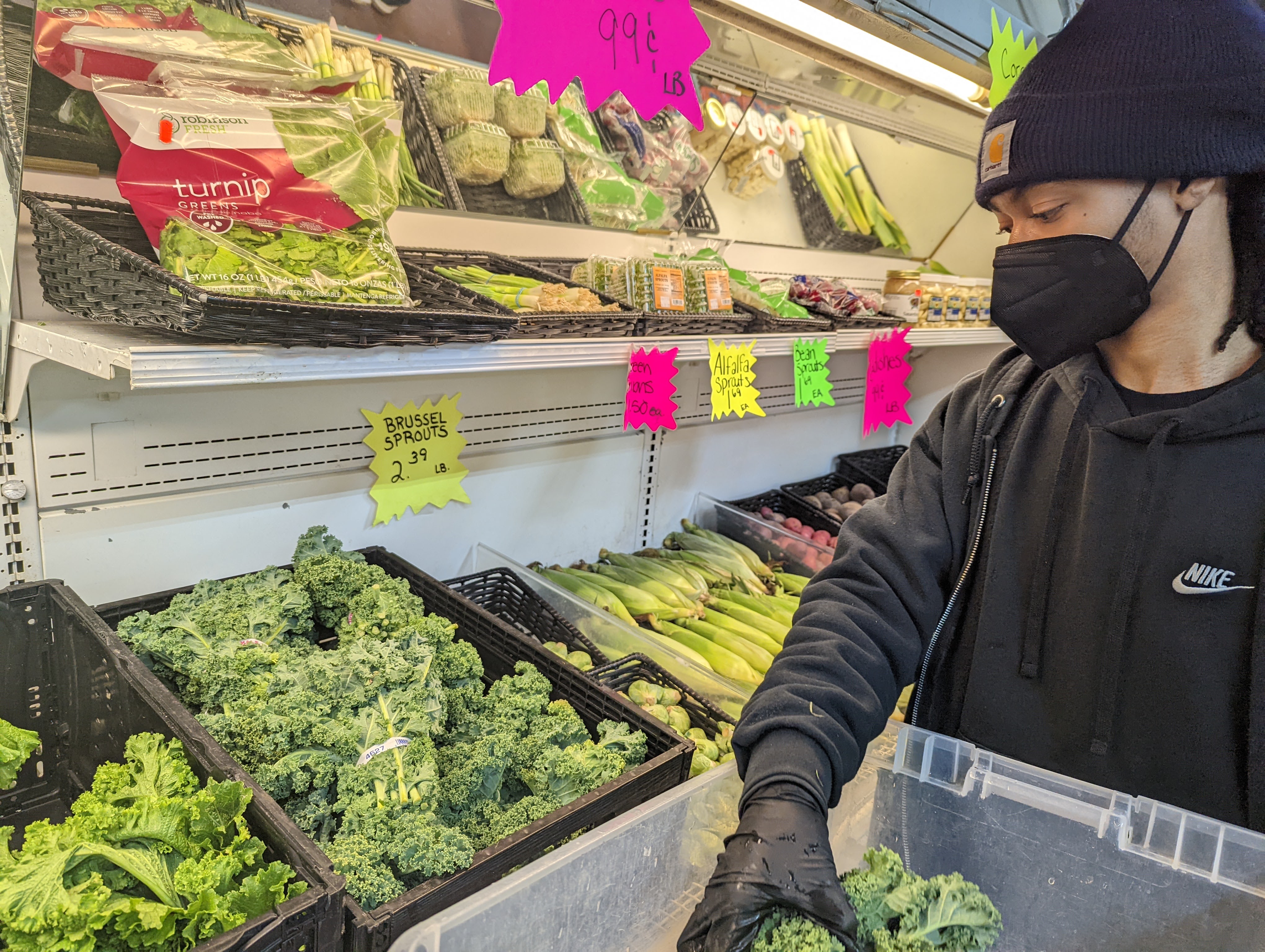 On a sunny Saturday morning, 7-year-old Aria helped her aunt, Tiffany Payne, select produce at the Farmer Jones Indoor Market. They were buying vegetables for a stir fry. Payne said she shops at Farmer Jones often because she can buy smaller portions when she cooks for herself and her son.

“Produce is expensive sometimes, and goes so fast, so I like coming here. They’re very friendly and helpful," she said. "I love watermelon. My son don’t. So a big one is too much. So they’ll just grab one, cut it in half or thirds, and bring it out.”

“Now, people are much more aware, particularly in African-American communities because we’ve seen auntie, uncle get their foot amputated. We’ve seen dialysis," Durden said. "We’re like, 'I don’t want that.' What’s the difference? It all starts with diet."

More than 200 miles away, the Gem City Market in Dayton, Ohio is an example of another kind of grocery store that can be used to provide food to areas that are not served by traditional grocery stores.

Keith Sutton lives in Dayton, two miles away from the Gem City Market, a new co-op grocery store. He’s one of the co-op's 5,000 member-owners. On a recent weekday afternoon, he made himself a lunch from the salad bar.

Member-owners pay a one-time fee to join. The regular membership is $100, but those who self-identify as low or fixed income can get a membership for $10.

People who become members have a stake in the company, qualify for member-only sales, and can vote on issues to improve the store.

Sutton goes to co-op meetings, and at the last meeting, he voted to create the salad bar where he made his lunch.

"When the store first opened, it didn’t have a salad bar," he said. "As a matter of fact, I suggested that as well."

Sutton eats lunch at the salad bar three or four times a week, he said.

The surrounding neighborhood on Dayton's west side is about 77% Black, according to Gem City Market officials and was the affected by redlining, a systemic practice that kept Black people from buying homes in certain areas and discouraged investment in Black neighborhoods.

The grocery store has helped with some of that segregation, said Gem City Market co-executive director amaha sellassie, who requested his name be written in lowercase.

"It's also been healing these wounds. Because of the river and the high levels of segregation, a lot of people east didn't go west and west didn't go east," he said. "The organizing and the volunteering for this process, people came from the east to come help. People worked together. We built these deeper relationships." 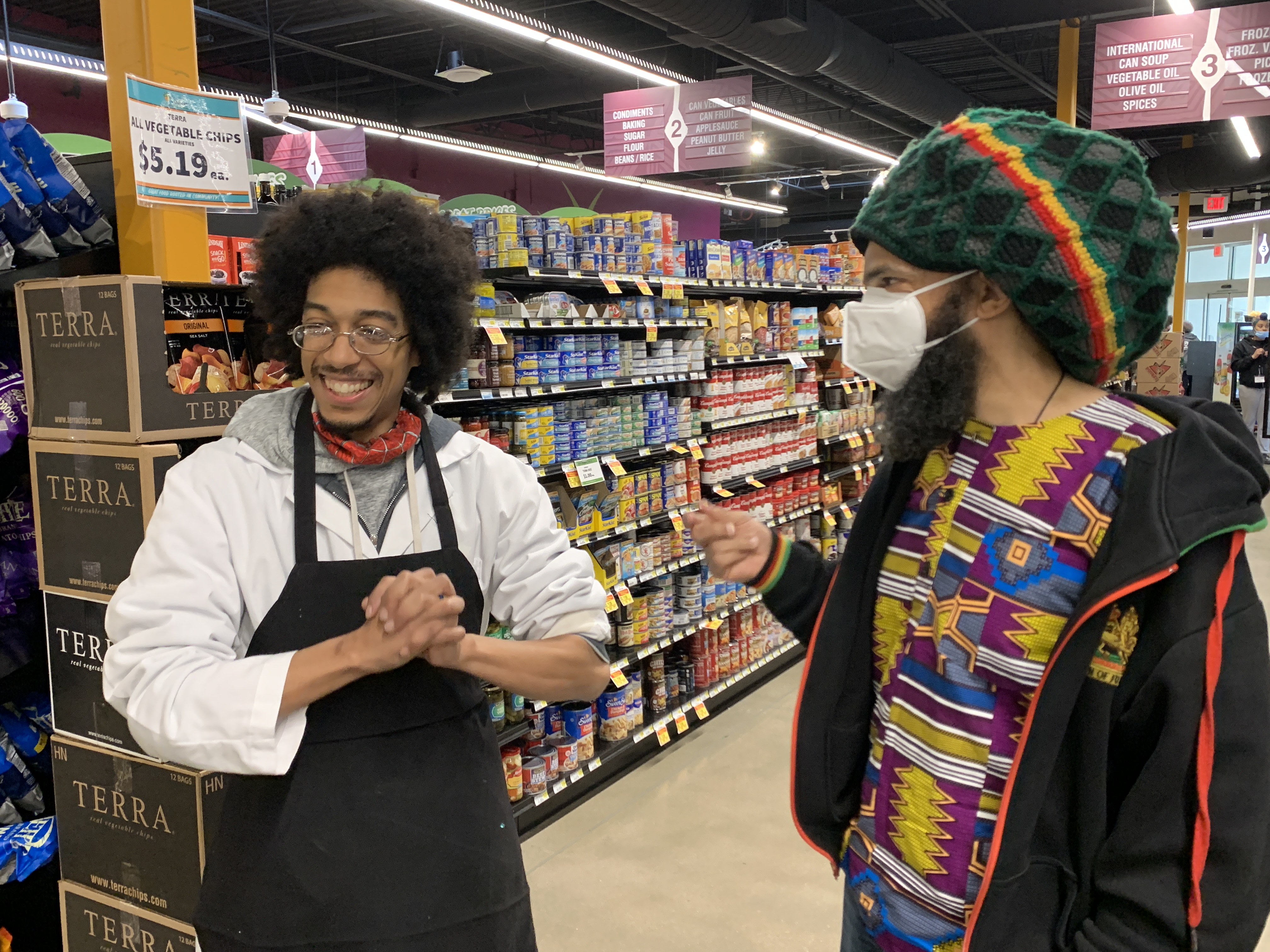 Gem City Market butcher Adrian Harris talks with the market's co-executive director amaha sellassie. Harris views himself as an old-school butcher, who makes connections with his customers and knows what they want. “A lot of times, a customer will tell me, hey, on Thursday I’m coming in, can you do this for me? And I’ll just cut up some liver a little bit thicker than I normally do. You can go to Kroger and grab a bunch of stuff, but you are now connecting with me," Harris said.  [Anna Huntsman /  Ideastream Public Media]

It takes a lot to operate a grocery store in a food desert, including a co-op, market leadership said.

The market's other executive director Lela Klein said they planned to not make a profit for the first four years. They just celebrated their first year in business.

“We took on enough working capital at the beginning to get through," she said.

Building a grocery store in a food desert can be risky, because they require a lot of capital up front and often serve a small, low-income population, according to Buxton, a company that analyzes industries like retail.

“You cannot take shortcuts. The grocery industry is no joke," she said. "It’s extremely competitive. There are people who are competing for every single grocery dollar in everybody’s budget."

It can take an average of between 5 and 7 years for a co-op to open, and those that open too quickly tend to close, she said.

The grocery business can be about more than just access to produce and other staples, said Ann McEvoy, who co-founded and operated a nonprofit grocery store in Lakewood, Ohio whose primary mission wasn't food.

The mission at the Bin, which operated for more than 40 years before closing in 2016, was to help adults with disabilities learn job skills and become independent.

The Bin started as a small produce stand in Lakewood's Birdtown neighborhood and grew to be a standalone store known as Nature's Bin on Sloane Avenue. 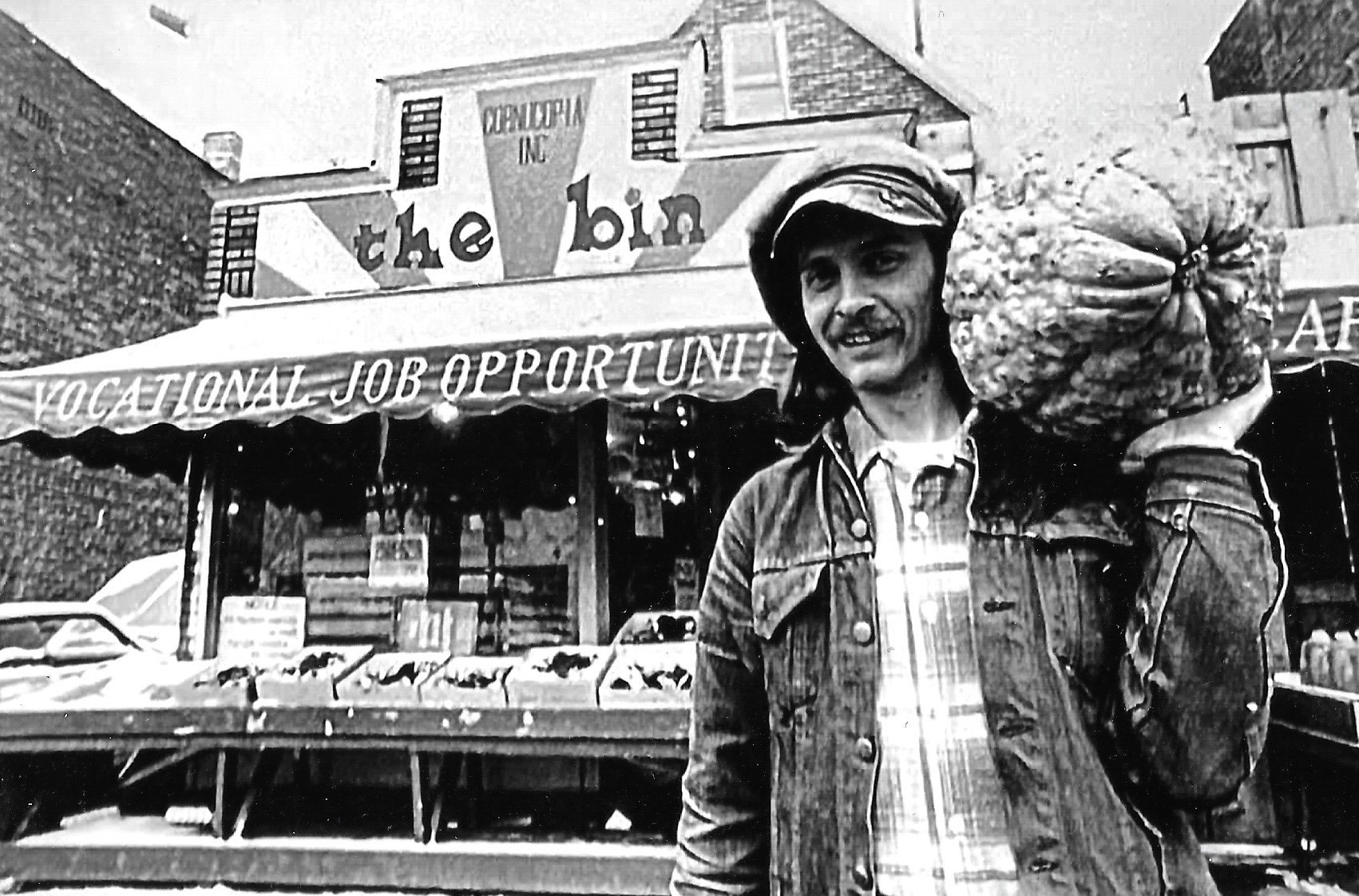 Brian Daw (pictured) and Anne McEvoy founded Cornucopia Inc, a non-profit that ran the Bin, a locally-owned natural food store, that operated in Lakewood, Ohio for more than 40 years. The Bin sold produce and other grocery items in the Birdtown neighborhood. It became Nature's Bin and moved to a location on Sloane Avenue before it closed in 2016. The market also provided employment for people with disabilities, said McEvoy.  [Special to Ideastream / Daw family archive]

But McEvoy explained that they had to provide great great products or the primary mission would fail.

“From the very beginning, the whole point of setting up the store was as a job training program for adults with developmental disabilities, she said. "We didn’t want people coming in just because they felt sorry for the handicapped kids. We wanted it to be a product.”

McEvoy offers some words of advice for those trying to run a grocery store: Don’t let the success of a business rely one person, or it won’t be sustainable after the person leaves.

“I think anyone who starts their own initiative, business, company, organization, whatever learns that really, really quickly, or they learn it the hard way," she said.