Cleveland’s restaurant scene has gotten rave reviews over the past decade. But the city has a long and rich culinary tradition that dates back throughout the 20th century. Many of those dining spots are gone but not quite forgotten. They’re celebrated in a new book, "Lost Restaurants of Downtown Cleveland." Author Bette Lou Higgins grew up in Garfield Heights and later lived in Vermilion and Elyria. She fondly remembers dining at some of the eateries from the past.

Higgins: "My favorite eating memory was Chef Hector's, which at the time was in what I considered a very bizarre building. It looked like a warehouse from the outside, and then you would go downstairs into this basement, and you were suddenly in this big restaurant room. And of course, ‘Chef Hector’ was Ettore Boiardi, and my dad would always tell us, ‘You know this is Chef Boyardee, like they have in the grocery store?’ So it was kind of a big deal.”

KB: “That was near today’s Progressive Field, and also near the original location of another restaurant in the book, correct?”

Higgins: “Yes: the original Otto Moser's was on East 4th. It was one of my favorites. It was in a small building that was from the late 1800s, previously a costume company, and it was just basically a little deli. There was a basement room that was connected by a tunnel across East 4th Street to the Euclid Ave. Opera House, and people would use the tunnel to get back and forth. All the actors would come over there and at some point they started leaving signed pictures. Otto would put them up in the most haphazard way in these crazy wooden frames that just covered the wall. The first time I went in there and saw all these old pictures of actors, it was just astounding.” Bette Lou Higgins profiles more than two dozen restaurants between Playhouse and Public Squares in her new book. Here, she's at Republic Restaurant, where they have reproductions of some of the vintage photos from predecessor restaurant, Otto Moser's. [Kabir Bhatia / WKSU]

KB: “I know a lot of those photos made the move to Playhouse Square location in the mid-90s, and then were preserved at Cleveland State University after the restaurant closed recently. Tell me what happened when Will Rogers left his photo.”

Higgins: “He threatened to shoot the place full of holes if he came back to the restaurant and could not find his picture. But I think we're safe at this point.”

KB: “I think we're safe, too, although Mr. Moser could apparently find any photo in seconds?”

Higgins: “Yes, the rumor is that he knew where they all were.” 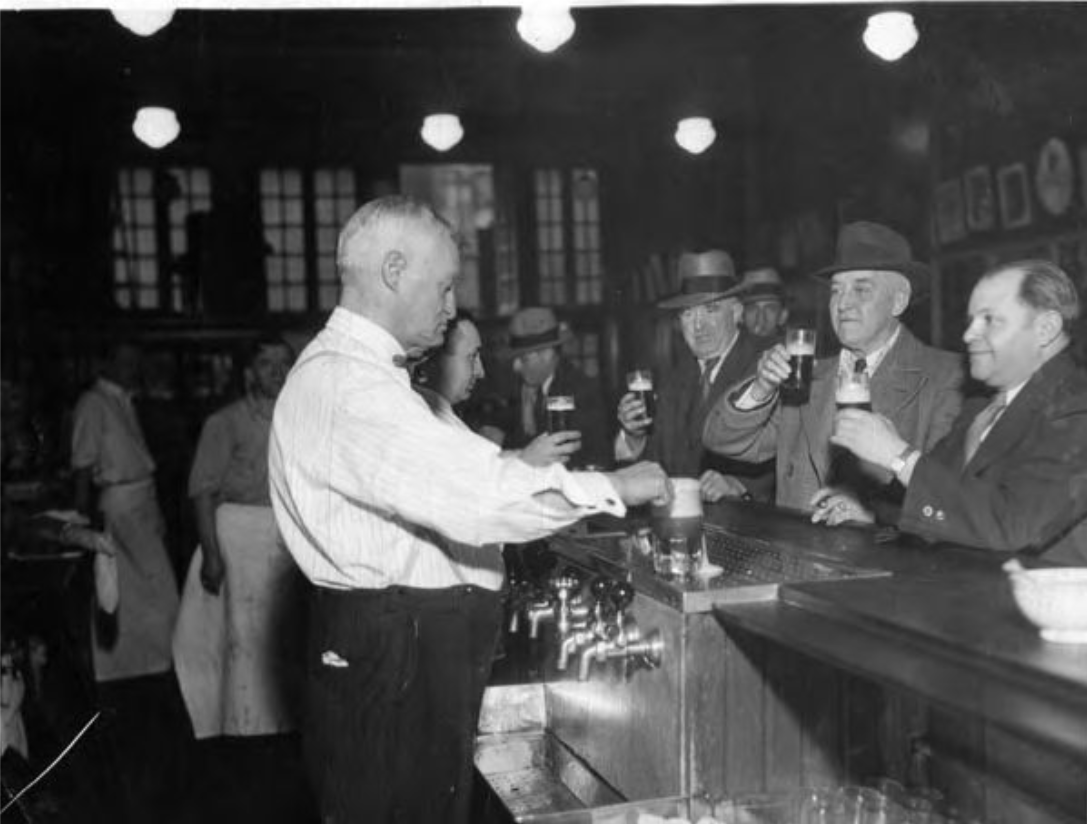 KB: “In the book, one of the restaurants that jumped out at me, because I'm always seeing people post photos of it, was Captain Frank’s.

Higgins: “Oh, my goodness, Captain Frank’s! That was definitely a place to go. It was on the East 9th Street Pier, and it wasn't so much that the food was fabulous as much as the location. You are sitting basically on a pier, overlooking Lake Erie on all sides, and it was so very romantic. The Goodtime [ship], which went up and down the river, would often come into that dock. They had all sorts of seafood, of course, and regular fare. So, it was one of the places to go.”

KB: “That closed almost 30 years ago. Otto Moser’s closed in the last couple of years. When we lose restaurants like this, what are we losing?”

Higgins: “That's a really interesting question. They had built up a clientele and a reputation. It's kind of the ‘Cheers’ effect: where everyone knows your name. And maybe they don't always know your name in some of those places, but you feel like they do because you're always going back to your favorite place.

KB: “There used to be at Hopkins Airport a little ‘Cheers’ bar. Maybe that’s in the next book?”

Higgins: “That's not even in Cleveland; that's in a suburb! But hey, it could happen!”

KB: “When you speak at libraries about this book, what are some of the restaurants which people frequently mention?”

Higgins: “Well, a lot of people are mentioning restaurants that are not within that Public Square to Playhouse Square are – such as Swingos. Everybody wants to know about Swingos which is where Elvis would stay. A lot of stars who played Playhouse Square would stay there. The Mafia was there -- which may or may not be important. Other favorites are in Ohio City, which is on the opposite side of the river, so people want to know about those. And of course, during the late 1970s and 80s, The Flats was just beginning to come alive: Pickle Bill’s, the Flatiron Cafe has a huge history -- and it's still there. I think it's legitimate and certainly we could do ‘Lost Restaurants’ of anywhere: all of Ohio, Terminal Tower, and on Short Vincent [Street].”

KB: “So many of the restaurants in the book are from the mid-20th century. What was happening in Cleveland – not just with the theaters – but in general with shopping that led to so many restaurants springing up in this area?”

Higgins: “Well, Cleveland was growing. I actually start the book when Cleveland was settled, and so Public Square was the main part of the city. As industry came through the Ohio and Erie Canal -- ground was broken and it was completed in 1832 -- huge businesses grew up in The Flats to build boats. There was shipping on the Great Lakes; Rockefeller came and started Sohio [Standard Oil]. So, there were a lot of supporting retail and restaurants and boardinghouse establishments all clustered in the downtown area. And of course it kept going farther and farther east and crossed the river and headed west and eventually south. So, all of the major department stores that became central to downtown -- May Company, Halle’s, Sterling Lindner -- they all started in the early 1900s through the heyday, which went to basically about 1980, when they started shutting down. So, restaurants had plenty of customers. A truly bustling city. It wasn't until suburban sprawl that things made a huge left turn away from the downtown area.”

KB: “And then about ten years ago, we started seeing the restaurant scene come back -- and it's getting nationally recognized. But the fare is completely different: it's not Italian and German like the ones in the book. Talk about that shift, because in between there were 30 years where there wasn’t much downtown.”

Higgins: “You're right, it was basic food. In the mid-70s, there was not a lot of activity downtown. The theaters were closing up. People were afraid to come downtown so there weren't a lot of new restaurants open. And it wasn't the casual ‘let's sit back and eat and talk’ kind of dining. You came in, you ate your hamburger, and you left. That's just my take on it.

“There was a whole change in attitude once the theaters opened up and activity started coming back. And then our food tastes changed, we became more conscious of cholesterol and healthy eating, the Mediterranean diets came in, Asian food and Indian food and all sorts of new ethnic groups came in. I mean, the Italian population was not living downtown anymore. When New York Spaghetti House opened, their initial attraction word to the Greek neighbors who lived there. They were giving Turkish coffee to their Turkish neighbors, who happened to live there during the building of the canal. The bulk of the people living in that area down by The Flats were Irish, because the Irish came in to work and a lot of Germans came in. A lot of Italians worked on the Lorain-Carnegie Bridge, now called the Hope Memorial Bridge. The restaurants fed the people who were living downtown.”